This two-meal recipe is an all-time favorite of mine.  It originally began as a recipe I saw in 2015 from a gluten-free magazine named Gluten-Free & More.  I’ve changed it up through the years, but it is still one of my all-time favorites.  The marinade for this pork tenderloin really makes the meal.  I have to be careful with store-bought marinades because they can contain gluten (or peanuts or tree nuts).  Also, most prepared Asian marinades contain soy sauce, which contains wheat (and thus, gluten).  The safest course, as always, is to make my own marinade.

So, I bought a 2 lb lean pork tenderloin (when you open the bag, there are two tenderloins inside).  My first step is to always trim the fat and silver skin off of my pork tenderloin.  As long as you have a sharp knife, all you have to do is poke your knife tip under the silver skin, and it will slide right off. 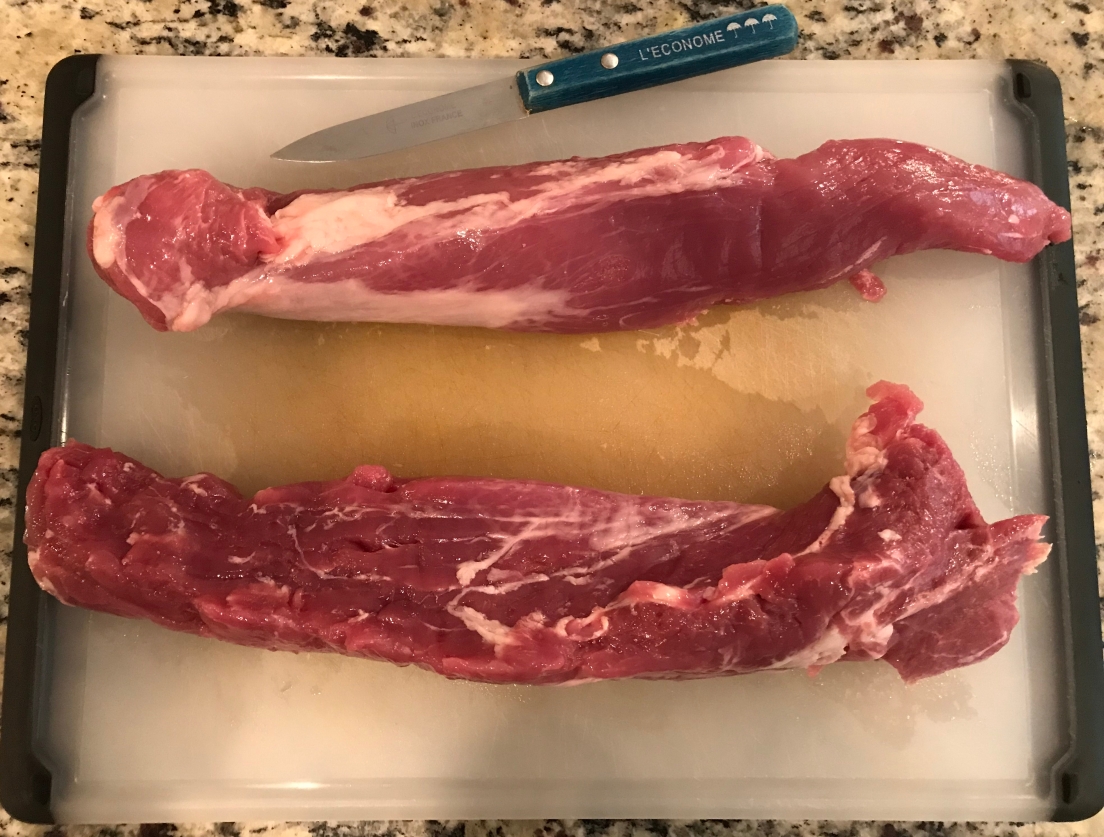 Once trimmed, the tenderloins are placed in a gallon zipper storage bag, ready for the marinade.  The nice thing about these lean pork tenderloins is they look large, but coil nicely in the bag.  To make the delicious marinade, I combined in a measuring cup:

Once the marinade was mixed together and smelling delicious, I poured it over the pork loins and popped the baggie in the fridge.  I usually marinate the pork either overnight, or for most of a day. 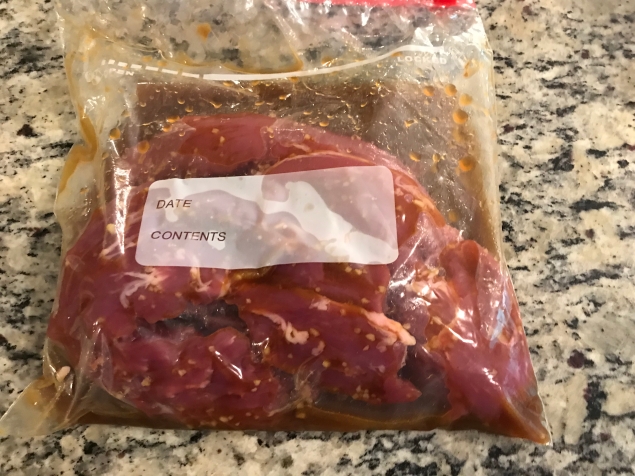 You can see that you want enough marinade to get to almost 1 cup of liquid.  This made enough liquid that next time, I will simply reserve some marinade before putting the pork loins in, so that I have enough to use as a sauce without worrying about the raw meat germs.  Now, the very best thing about this recipe is that it makes 2 roasted pork loins.  I roasted both in the oven at 425 degrees for just shy of 30 minutes (I used my meat thermometer around 27 minutes and they were exactly at 160 degrees).

To make a gravy, I poured my marinade out of the bag (after I had removed the pork to the oven), and boiled it on the stove in a small saucepan for 10 minutes to kill the raw meat germs (like I said, next time I may just reserve some marinade before the pork goes into it, since there was plenty).  Briskly boiling any marinade that has contained raw meat for ten minutes is essential, if you want to avoid getting sick!  After the marinade had boiled for 10 minutes, I added a few splashes of low-sodium chicken broth, and about a tablespoon of corn starch dissolved in water first, to thicken the gravy.  I let that boil together for a few minutes longer.  I am very paranoid about food poisoning so when it comes to anything involving raw meat, I am extra careful about cook times and temperatures.

If you have a larger family, both pork loins can be used up pretty quickly in one meal!  However, my kids don’t eat that much pork, so I was able to use my second pork loin for a meal the next day.  The easiest thing to use leftover, already-cooked and already-sliced meat in, is a stir-fry of course!  I boiled wide, gluten-free Asian rice noodles in a sauce pot, and stir-fried (in a very hot pan with a little oil) some favorite veggies – broccoli, carrots, a sliced red pepper, a sliced onion, some minced garlic, and a can of those cute baby corn cobs to make things more interesting.

If you can use sesame oil, that would be the tastiest to use when making a stir-fry (I haven’t found one that is safe for V’s peanut allergy, as the bottle had a warning about being made in the same facility as peanut products).  For the sauce for the stir-fry, I used 1/4 cup of gluten-free teriyaki sauce, a few shakes of soy sauce, a teaspoon of ground ginger, and at the end, a little chopped cilantro.  It was delicious and fast!