After a busy summer, I’m ready for the cooler weather. While it’s still warm here, I like to start getting into the Fall frame of mind. Fall always reminds me of heading to a farm, picking pumpkins, making apple pie, and just all-around yummy, spicy flavors. Donuts were at the top of my list this week. Because I’m gluten-free, it can be harder to find donuts that I can eat. I prefer to make my own, baking them in the oven and getting that warm fresh-out-of-the-oven taste.

Although I deeply love frosting and glaze, since I was going for a Fall flavor, I decided to use cinnamon sugar topping for this batch. I like a good vanilla glaze as much as the next person, but I’ve found if I want to save the donuts for later, my glaze often sogs and sinks into the donut. It’s a real disappointment when you’re looking forward to eating a donut and you find a sad soggy mess.

So, this is how I made these delicious creations.  The yummy spicey Gluten-Free Cinnamon Spice Donuts recipe is at the bottom of the post.

These are very simple to make with minimum mess, which is always a big plus in my book. I did already have a special donut pan (a Wilton pan that has 6 donut molds), but you can also try hand-piping the donuts out onto a sheet pan lined with parchment paper. I am not great with piping (either with a professional bag or with a plastic bag with the tip cut off) so the pan is perfect for me. 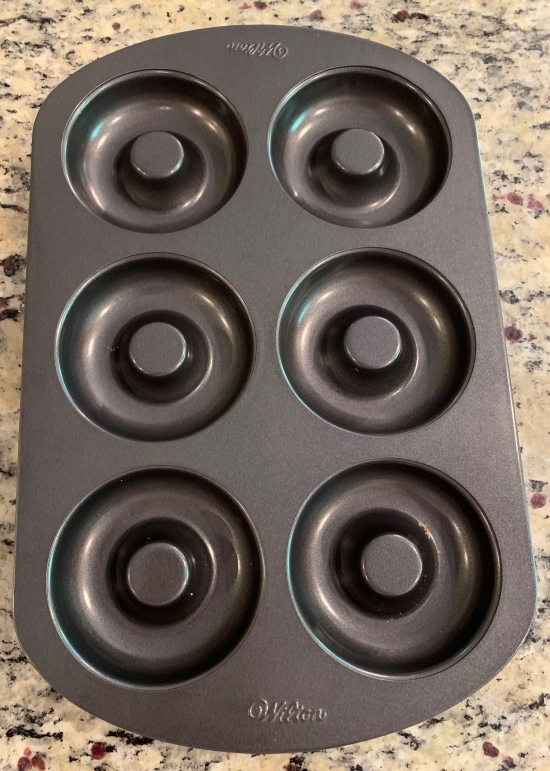 You only need one bowl for this recipe, which is awesome for clean-up. The first step is to mix together all the dry ingredients. So, I combined in one large bowl, my gluten-free flour (it is a blend that already has the xanthan gum mixed in), brown sugar, baking soda, baking powder, salt, cinnamon, nutmeg, cloves, and ginger. 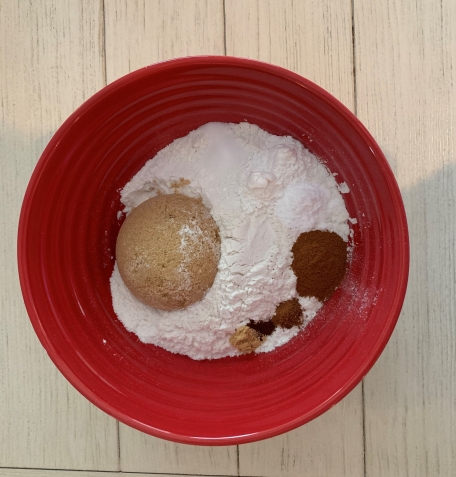 Once that was well mixed, it was time for the wet ingredients. I added applesauce, eggs, vanilla extract, very soft butter, and sour cream. You can use buttermilk to replace the sour cream if you prefer, or Greek yogurt, which I think would be a yummy tangy addition.  For the applesauce I used, I happened to have cinnamon applesauce, but you can use natural applesauce, chunky applesauce, or whatever you have on hand. 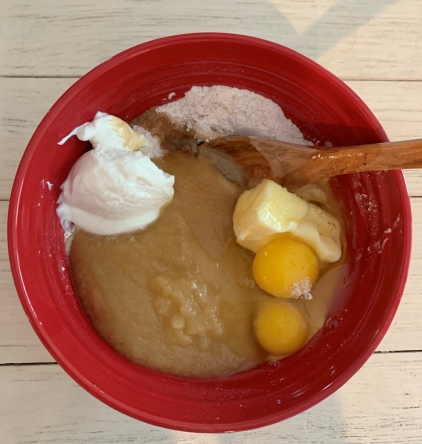 I mixed the wet ingredients into the dry ingredients until I had a thick batter. My last step was to add some grated apple. I peeled one apple and used my lemon zester to grate some fresh apple onto a sheet of foil. I only used a quarter of a cup of apple (it was one small apple, grated), but you can definitely increase it, or use finely diced apple as well. Just be careful the apple pieces aren’t too large or they won’t cook all the way through in the oven. 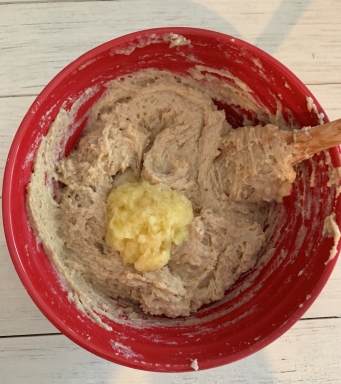 After gently folding the apples into the batter, I turned my attention to the donut pan. First, I sprayed it lightly with cooking spray because there is nothing sadder than a stuck donut. Second, as I mentioned, I am TERRIBLE with any type of piping. Things seem to go all over the place and it all gets messy and frustrating. So until I improve my piping skills, I decided to use an ice cream scoop to fill my donut pan.  As you can see in my pictures, my donut pan has a small cylinder in the middle of each donut mold, so that the donut will bake around the cylinder and create the hole for the donut. So, after each ice cream scoop of batter was placed into my donut molds, I used a spoon to push the batter off of the center cylinder in each mold, so that I would still get a donut hole effect.  Worked for me!

Then, I baked my donuts in a 350 degree oven for about 13 minutes. I checked on my donuts at 10 minutes, but they were still jiggly on top when I touched one. To make sure they are done, when you touch a donut, the top should spring back under your finger (and not jiggle or feel super soft with uncooked batter).

I immediately turned my donuts out onto a cooling rack when they were finished.  You can see they puffed up some and the center hole on some of the donuts are smaller – this does not bother me, but if you like a larger center hole in your donut, just fill the donut molds a little bit less than the ice cream scoop so it doesn’t puff over the center cylinder as much.  I made a second batch (since my pan only held 6 donuts) and those I filled a little less, so the donuts didn’t bake over the cylinder quite as much (see photo at the end of the page).

I melted two tablespoons of butter in a small bowl, and mixed on a flat plate some cinnamon and white sugar to make cinnamon sugar. I used a silicone brush to brush the top of one donut with butter, and then placed it butter-side down into the cinnamon sugar mixture, covering the surface with the yummy sugar mix. 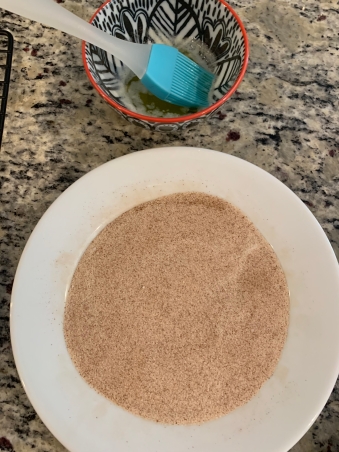 You can get as crazy with the butter and cinnamon sugar as you’d like. I just did the tops which was good for me, but you can cover the side or the whole donut if you prefer. Serving them warm was the best decision, and my children were happy to come home to fresh warm donuts (something they rarely see!). A bonus to the gluten-free donuts is that my peanut-allergic daughter could eat one safely as well (due to cross-contamination issues, she doesn’t get donuts very often, either). Win-win.

Directions: Preheat oven to 350 degrees. Mix together the dry ingredients: gluten-free flour, brown sugar, baking soda, baking powder, salt, cinnamon, nutmeg, cloves, and ginger. Once thoroughly mixed, add the applesauce, eggs, sour cream, softened butter, and vanilla extract and mix well. Gently fold in the grated apple. Spray a donut pan with cooking spray, and using an ice cream scoop, scoop batter into each donut mold. Using a spoon or your clean finger, wipe the batter away from the center cylinder so that the donut will still bake with a hole in the center. Bake for about 13 minutes or until light brown and donut springs back when gently pressing on the surface (if it’s still jiggly, bake longer). Immediately turn donuts out onto a cooling rack. Melt the 2 tablespoons of butter in the microwave. Mix the cinnamon and white sugar together on a plate. Using silicone brush, brush butter all over the top of a donut, and immediately dip into the cinnamon sugar. Tap the excess off. Of course if you prefer, you can use more or less butter to cover the surface of the donut for dipping into the sugar. Serve warm for the best tasting donut!